If Only Christina Applegate knew …

Recently I have informed about a case report which mentions recovery from ALS syndrome. I spent some time analyzing it and can share my thoughts. The reaction of people and public is very inappropriate – it shows zero interest. As a result people will be dying. My mission is simple – change the way people think about ALS.

The first time I informed about this case​1​ was in my ALS Reasons Of Failure post. For me it was really strange as I found something which was very very close to my own theory. It really gave me a new energy in dealing with the ALS mystery. Of course I wanted to be cautious and I wanted to know more. My main question was why such hypothesis is not spread wider among public, why other science and research teams who are unable to come up with anything, have not jumped on it eagerly trying to prove any posssible value of this finding. What are the counter arguments? Well that is my thinking or my expectation on how mysterious problems should be approached. Today I know why it has not happened.

The problem with ALS is extremely large. It comprises just every possible type of human mistakes. Since I deal with it for some time I have clear evidence in the form of my own experience. I am already not surprised. It is only very sad. Some people could argue immediately but what else than mistakes cause people are not able to do anything with a person slowly dying for years? Despite having cutting edge 21st century technology (we already are not in middle age, right). The situation with ALS is just terrible. It is like if you suffered some injury and you would clearly show symptoms of the injury but all the medical system representatives (medics, surgeons etc.) would just watch you and let you internally bleed to death. This is what is happening with ALS cases. Consider my experience:

However response came from ALS TDI. I am listing the e-mail response below. The lady stopped responding quickly but at least something!!! 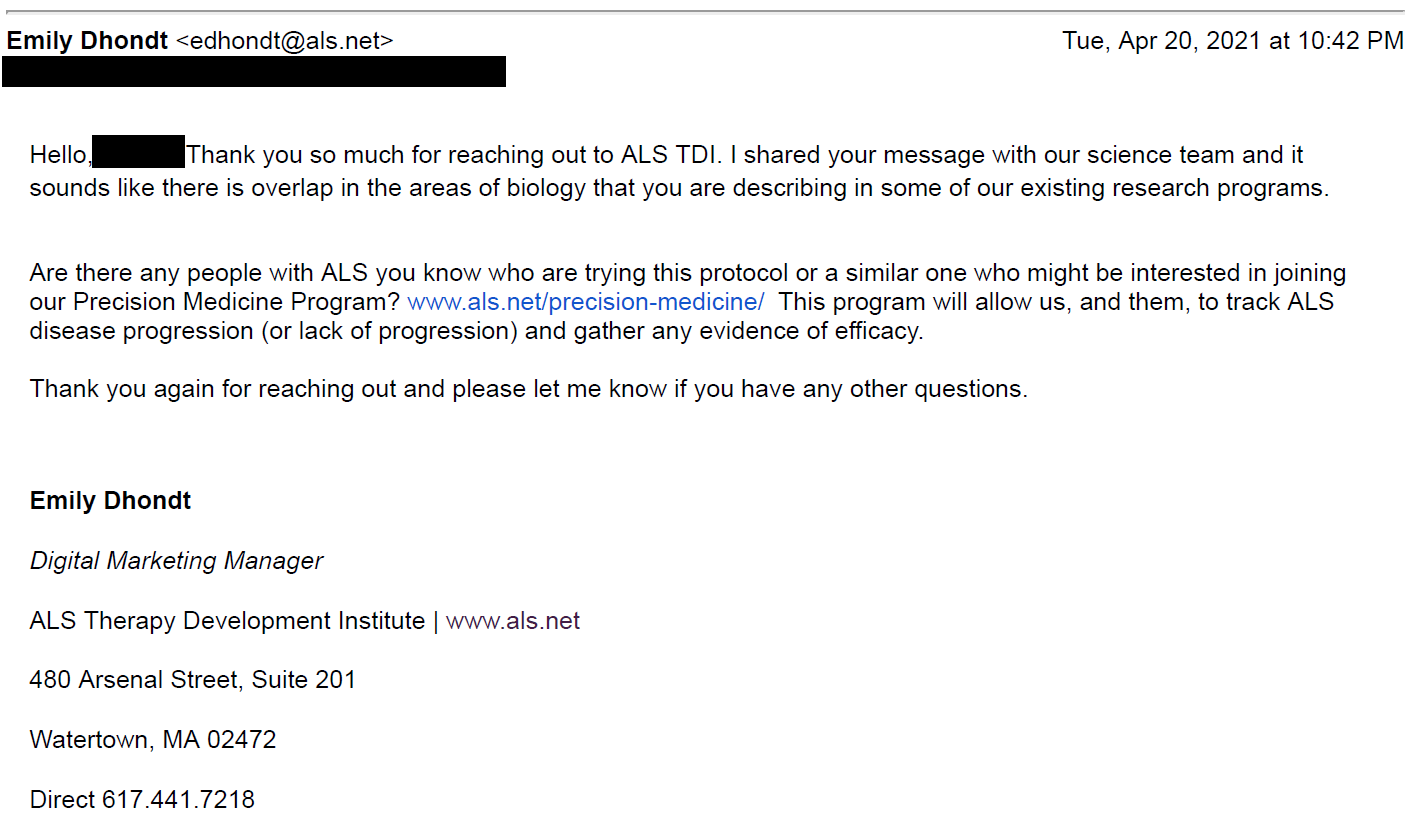 If I did not go through this experience I would not probably trust anyone who would be claiming this is how world is fighting ALS. Yet this is the reality. It is no wonder a real and well documented promising case which should be immediately evaluated as “RAY OF LIGHT|HOPE” is ignored and by some immediately criticized without giving any counter arguments of scientific value. Only true disbelief, untrust and anger how can someone dare to write ALS could be caused by this and that. Recovery? How dare you! ALS is incurable! Do you understand!!! INCURABLE! Remember it, but then please give us money so we can work on possible cure for you. This is the reality.

If you, the reader read this post and you are already leaving or you left even earlier, it is another evidence that people do not care. People think it is someone else job to resolve the terrible disease. But as I wrote the ALS is a huge problem and requires strong public voice which is not coming … What can change under such circumstances?

Some time ago I got response from those authors of the healing case report. They have not answered my questions but provided me another more detailed document where the case is further explained. Their excuse was also very typical – we are very busy! That is nice, everyone is busy with his work but nobody has time for proper communication and collaboration. And surprisingly no research team has results! This certainly is not how big wars or battles should be lead. Anyway I should be less critical to these German scientists – they are on it, they are close. Their theory is based on mercury intoxication and lack of important minerals mainly which is compatible with my theory. How is it possible they do not mention any role of pathogens? They are not experts in bacteriology and immunology. They look at the problem from their expertise only. However there were others who indeed were experts in before mentioned fields but lacked the know-how in toxicology. We already know pathogens are confirmed for ALS patients but something is missing to fully and reliably explain the whole ALS syndrome. What about bringing all these camps together? Would not it help? (this is exactly what I asked CDC for).

I am sure at least some normal persons would think something along these lines:

Well it seems, we humans, cannot succeed if we continue in this way or we will succeed after a very long time. Please remember it. One day, people will finally crack ALS, perhaps in year 2049 and you could remember some crazy person wrote about it on his website much much earlier, it was year 2021 and you have not done anything about it. It was not your fight and you were unbeliever … 😉

From the website logs I can see this post gets bigger attention and more hits from the search engines – it is logical, people are seeking for hope. From some strange reason those visitors then don´t continue with other posts here, perhaps they don´t need relevant information or they just don´t believe? Who knows.

Anyway I have additional information on this topic. As you may or may not know, there are certain cases called ALS reversals. These are medically fully documented cases of persons who were diagnosed with ALS, who had all the symptoms and who even got paralyzed so nobody ever doubted the deadly diagnosis was correctly given, but then … Then these people improved and even fully recovered. This sounds like fake news, but it is true. Please take a look at the Youtube video below, where Dr. Richard Bedlack, quite known and respected personality in the ALS community, describes such cases. One such woman (Nelda Buss case, check references below or Amazon) even provided him all her medical documentation and since he knows those physicians who gave the diagnosis after all the examinations (EMG etc.), he knows it just is real, no scam, it happened and he openely confirms this in the video. What is the problem?

People still haven´t found out why these few people get better, get significantly better or even recover. It is just as simple – medical system has no clue. But why is this credible information not widely spread to support each and every new ALS patient on the world? This is a disaster. I always thought that just one single ALS recovery case will bring the revolution, eventhough it won´t be fully known how it happened. I thought just the positive news “it is possible” will be huge hope booster for ALS community. I was so naive. This all is reality for years and still there is no knowledge no mention in any ALS case described in media, in any Facebook ALS page (ALSA, IamALS, ALSOne, ALS TDI). Why are people so blind?

I am convinced there is something very bad in the modern medical systems, something which prevents spreading hope so that more and more such cases can happen which in turn would lead to more and more data and this would really help researchers to more likely decipher the process. This bad thing can be described simply. If we (i.e. medical authorities) are not in control and we cannot explain everyone why someone recovered, while someone else is quickly deteriorating, then it is better to not stress those positive cases at all (it would be probably discrimination!). It simply hasn´t happened, the diagnosis was wrongly given, or it is an extreme case, in statistical terminology an outlier. And we are not interested in outliers, we need to be able to provide cure to everyone, we need a cure with efficiency > 50%, some mysterious recoveries are just irrelevant to us. People and ALS patients accepted this manipulation and think AMX0035 will save them …

I hope everyone is able to spot the catastrophical consequences of such medical paradigm. They want to help masses, but they don´t respect individual success, power of individual. It seems these authorities think masses are not composed from individuals at first. Very sad. We should not be surprsied though. Today medical world is under big financial pressure and it is also heavilly impacted by its previous and successful aproaches where a drug/vaccine/antivirotics/antibiotics/therapy was invented then clinically tested with acceptable success rate so it is immediatelly available to masses. This approach does not work with ALS though. I have described all the problems of all kinds here.

Why I am adding these additional paragraphs here? I need to improve credibility of these positive stories. They just happened. I don´t know much about all these cases, but I am not surprised what Dr. Bedlack is mentioning in the video – energetic healing, I read and wrote about these techniques here as well, Edgar Cayce or Jerry Tennant theory but while I am aware there is this mystic psychic mobilization factor, I also tried to link it with normal medical factors. At the end all is about energy but I don´t want anyone sick to become victim of some esotheric scam.

However I also don´t want people to repeat over and over there is no real hope, no amazing ALS stories, because there are​2​. Everyone who needs hope should cautiously explore these positive information and attempt to quickly complete his personal puzzle by comparing those findings and facts with his own case. I have done this too. Also think about the situation – why media never mention that and only describe sensational heartbreaking ALS cases. You can help by sharing any of these stories including this website.

Please see About Author page.
Previous ALS Awareness 2021 (LBR)
Next Their Fight Is Our Fight

When we see what ALS does to people we recall Holocaust. We see no hope, empoverished bodies,  human beings heading towards certain death. However we also see big lies, manipulation of masses and help which is not coming. It is time to break the silence again, at least on our website.